In the heart of the Jerusalem Hills, on the northwestern slope of Mt. Ruach, just 10 km from Jerusalem, a small cenotaph has been erected in the memory of five founding members of the original modern Jewish settlement there, named Gordonia. Gordonia was a Zionist-pioneer youth movement that believed in the values of labor and education as espoused by Zionist writer/philosopher A.D. Gordon, and its members, young people that immigrated to Israel as pioneers, adopted Gordon’s values. The five in whose name the memorial was erected, were shot dead in 1938, while clearing land for a road leading to the top of the mountain. The settlement in their memory, which was established soon after the murder, was named Ma’ale Hahamisha, Hebrew for “The Ascent of the Five.”

Kibbutz Ma’ale Hahamisha was established near Qiryat Anavim and Abu Ghosh as part of pre-State Israel’s “Tower & Stockade” settlement strategy, and it served as the base for Israeli “Palmach” fighters that were part of the young Jewish state-in-the-making’s Harel Brigade during Israel’s 1948 War of Independence. Yitzhak Rabin (who would go on to be Israel’s prime Minister and who was assassinated in 1995) was the 24-year-old commander of the brigade, which was responsible for the defense of the access roads to Jerusalem; he was in his headquarters on the kibbutz the day independence was proclaimed.

In 1940, just one year after the kibbutz began operating, its pioneer founders realized that they had were living in paradise. The clean air, wonderful landscape and unique atmosphere led them to the conclusion that they needed to build a sanatorium – which evolved in turns into a guest house, kibbutz hotel and hotel, as a tradition of hospitality developed and struck roots here, and continued to strengthen.

Three red-shingle-roofed buildings were the first to be erected in the kibbutz, along with a watchtower. These homes, which were unique and spacious for the time, were known as “The Lords’ Houses,” and they raised the bar for quality then, and for the way they blended into the hilly landscape. Overlooking the hills surrounding the kibbutz, they are considered to have laid the foundation for Israel’s tradition of hospitality. The Gordonia Hotel has been erected on this same spot, in the lap of those very same tall hills and clear air – setting a new bar itself for luxury hospitality in Israel.

Nearly 80 years have passed since the establishment of Kibbutz Ma’ale Hahamisha. Israel has changed, as has its style of life. The pioneering spirit has moved on to other fields of endeavor, but the marvelous landscape of the Jerusalem Hills as viewed from the kibbutz, remains as beautiful and unique as it was at the start of the 20th century.

The pioneer huts have vanished, and the Gordonia Hotel has replaced them with high-quality villas. The villas, surrounded by terraces of Jerusalem stone bathed in colorful, local flowering flora, amid vineyards and olive, fig and pomegranate trees, provide guests with the ultimate in comfort, and quiet. Paths built of Jerusalem stone offer direct access to the agricultural activities that surround the hotel; the boundary is undistinguishable, and it’s tempting to set out for a hike, relax under the shade of a grapevine and enjoy the connection between indoors and outdoors; landscape and meticulous interior design; the green of the olives and the turquoise water of the private swimming pools; the grapes growing in the vineyard and the wine poured in the room.

All of these form the promise of an intimate vacation in a private space, complemented by direct contact with nature, the landscape and the surroundings, a gourmet kitchen of the standard, and countless options for fun, culture, touring, and other activities guaranteed to satisfy anyone’s curiosity. 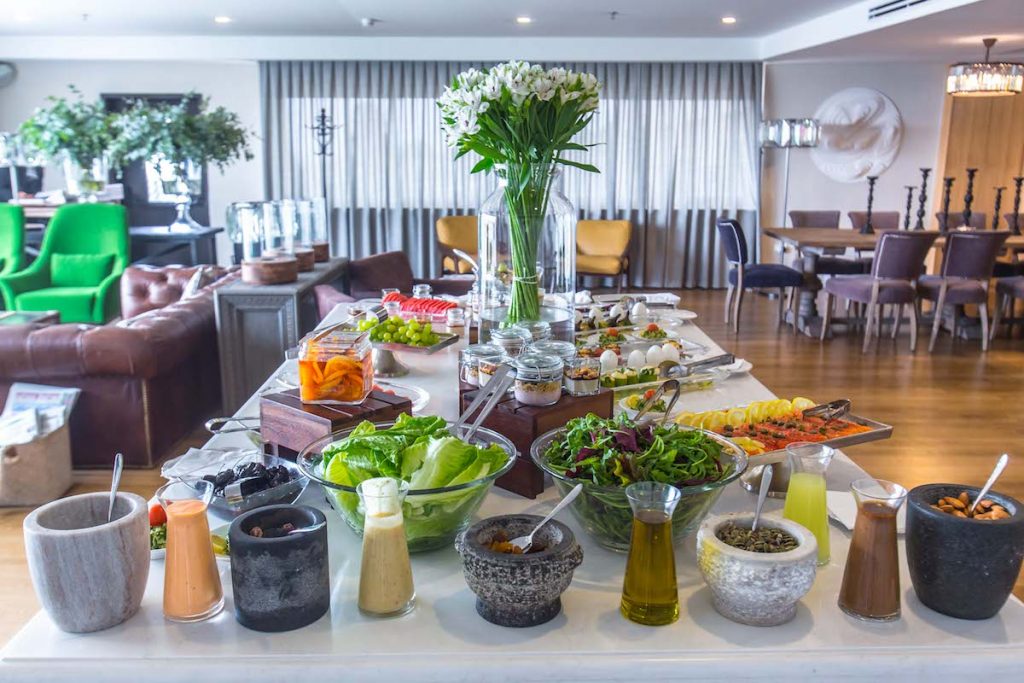 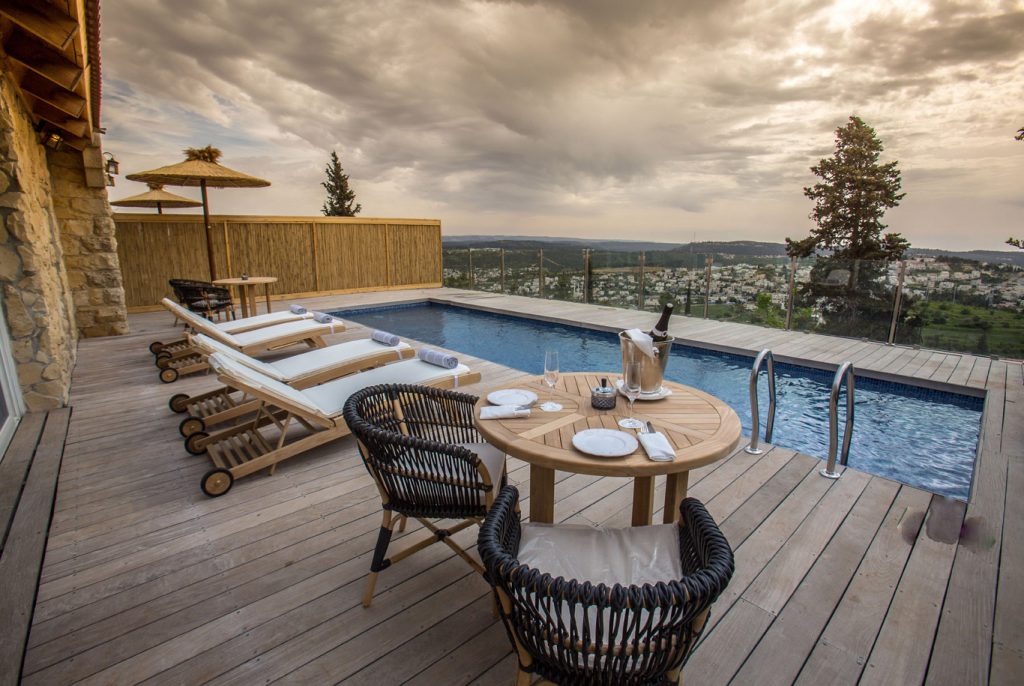 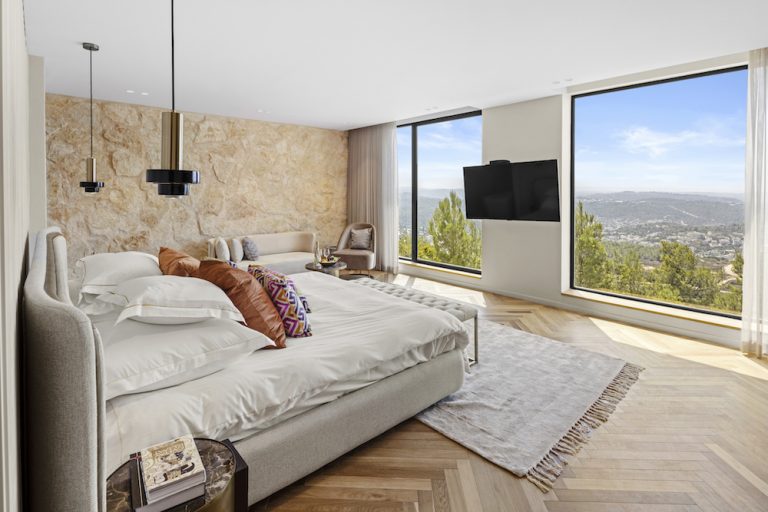 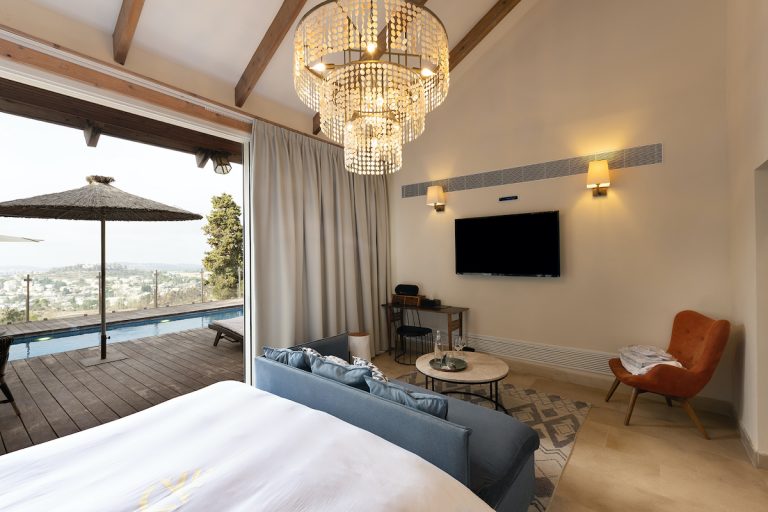 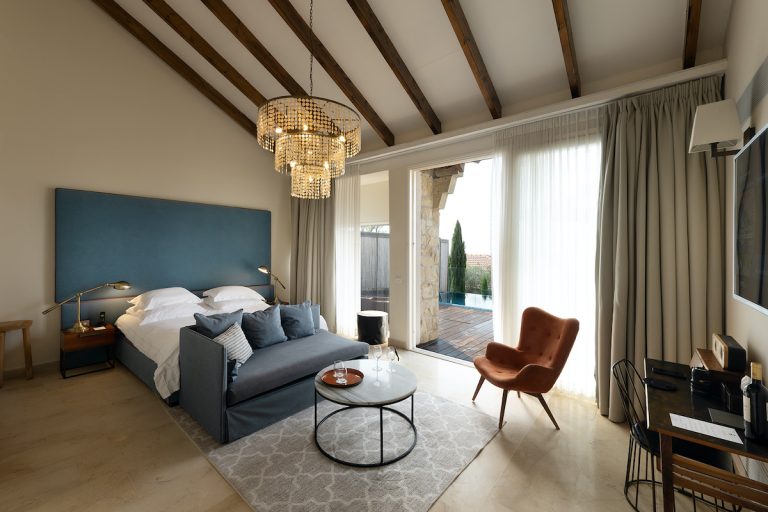 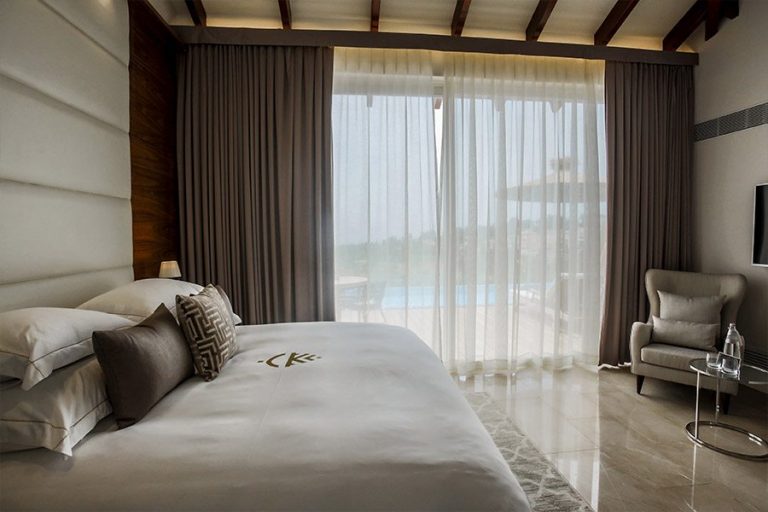 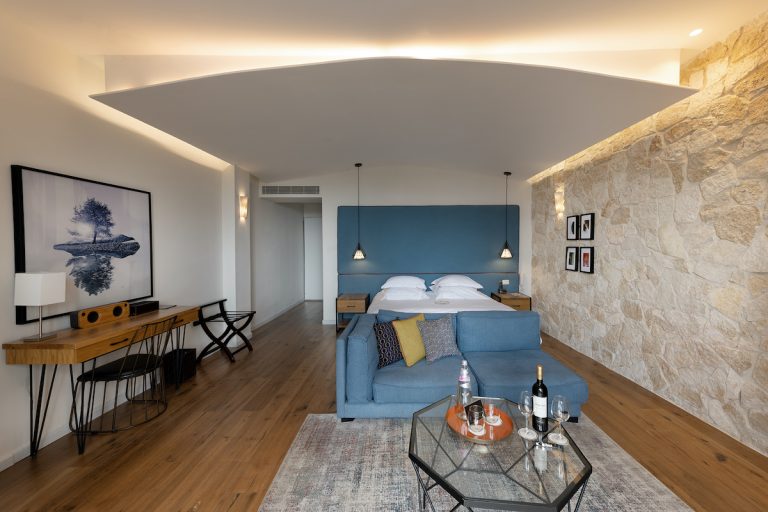 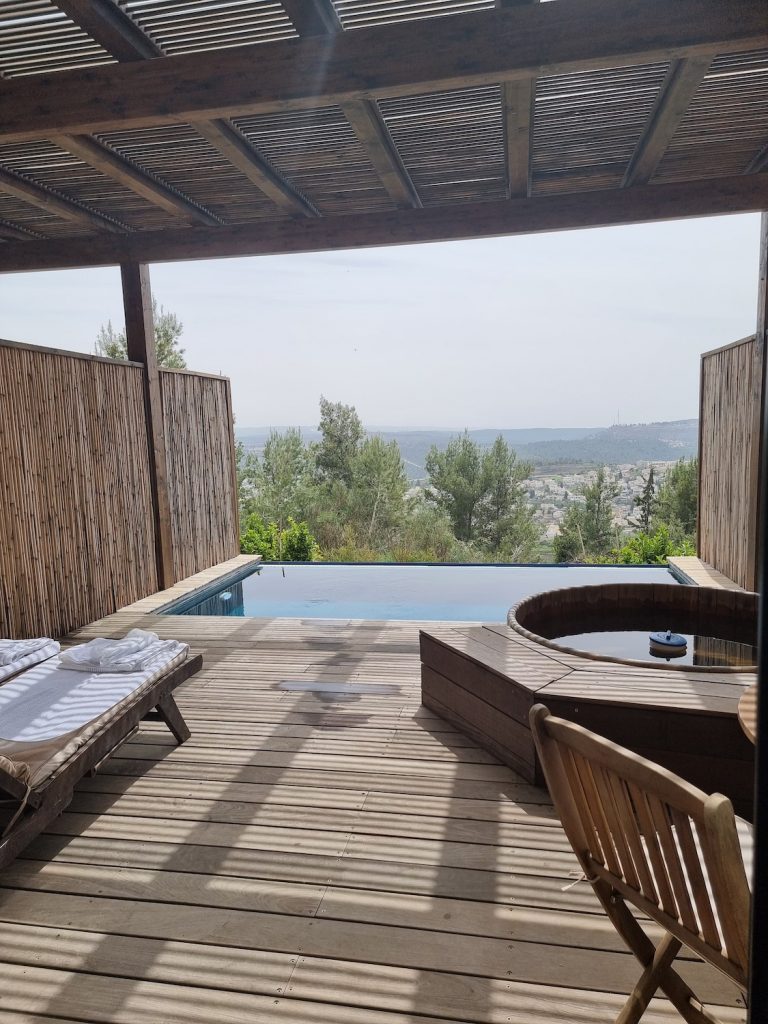 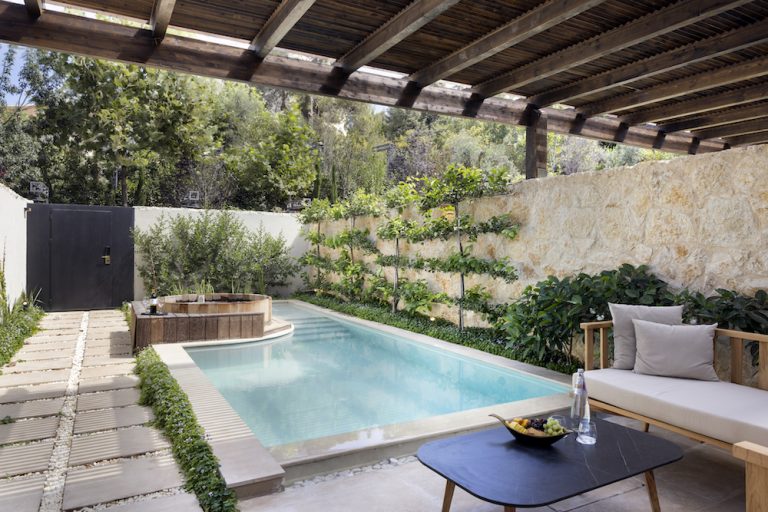 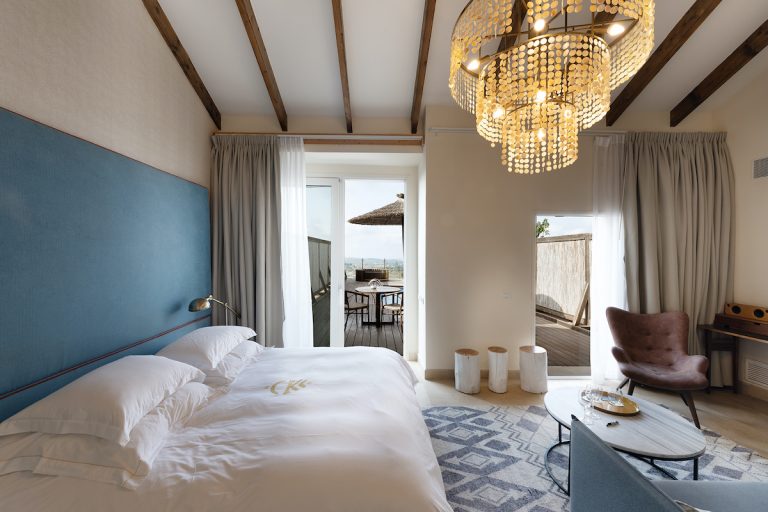 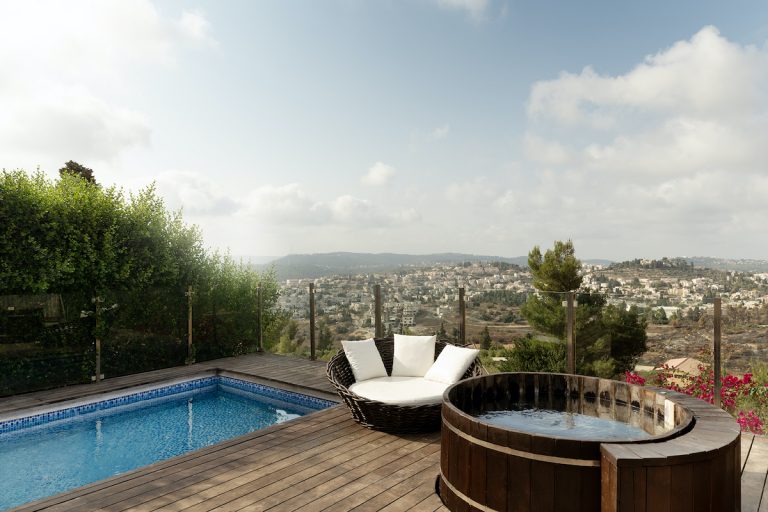 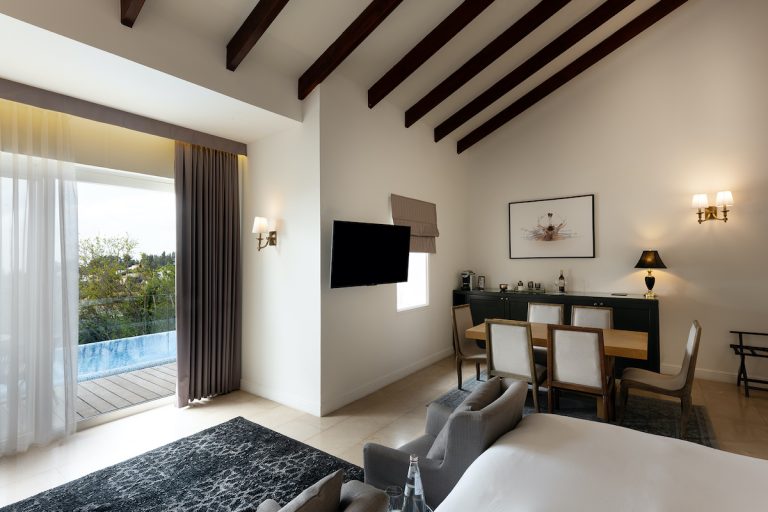 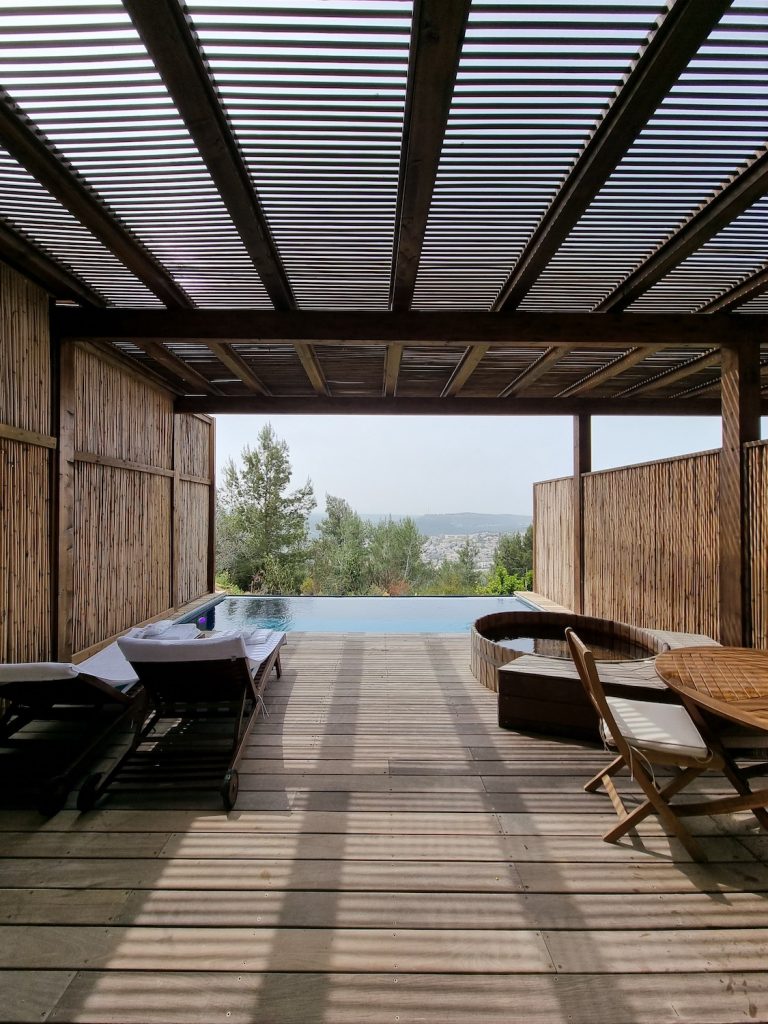 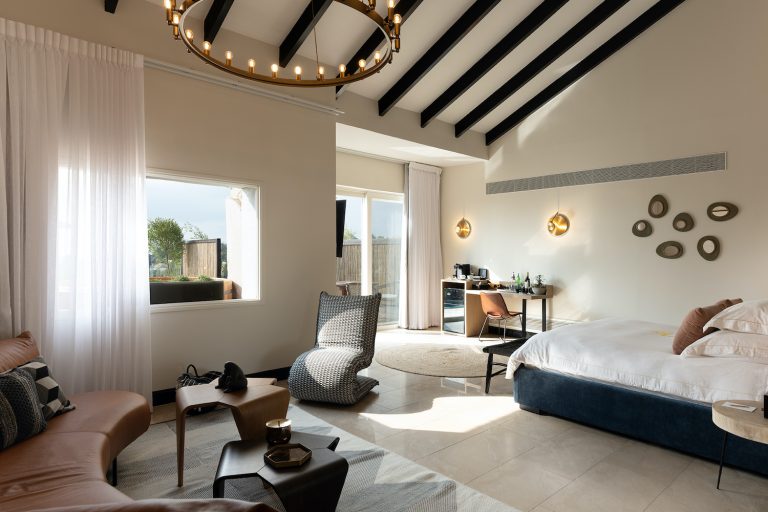 Epilepsy Safe Mode
Dampens color and removes blinks
This mode enables people with epilepsy to use the website safely by eliminating the risk of seizures that result from flashing or blinking animations and risky color combinations.
Visually Impaired Mode
Improves website's visuals
This mode adjusts the website for the convenience of users with visual impairments such as Degrading Eyesight, Tunnel Vision, Cataract, Glaucoma, and others.
Cognitive Disability Mode
Helps to focus on specific content
This mode provides different assistive options to help users with cognitive impairments such as Dyslexia, Autism, CVA, and others, to focus on the essential elements of the website more easily.
ADHD Friendly Mode
Reduces distractions and improve focus
This mode helps users with ADHD and Neurodevelopmental disorders to read, browse, and focus on the main website elements more easily while significantly reducing distractions.
Blindness Mode
Allows using the site with your screen-reader
This mode configures the website to be compatible with screen-readers such as JAWS, NVDA, VoiceOver, and TalkBack. A screen-reader is software for blind users that is installed on a computer and smartphone, and websites must be compatible with it.

This website uses cookies so that we can provide you with the best user experience possible. Cookie information is stored in your browser and performs functions such as recognising you when you return to our website and helping our team to understand which sections of the website you find most interesting and useful.

Strictly Necessary Cookie should be enabled at all times so that we can save your preferences for cookie settings.

If you disable this cookie, we will not be able to save your preferences. This means that every time you visit this website you will need to enable or disable cookies again.